The Pilbara is located in the north of the state, bordered by the Indian Ocean to the west and extending across the Great Sandy Desert to the Northern Territory border in the east. One of the largest regions in Western Australia, the Pilbara covers 507,896 square kilometres of unique and breathtaking natural landscape.

The region offers an abundance of rugged gorges, secluded waterfalls and isolated rivers and billabongs within its three national parks; Millstream-Chichester, Karlamilyi and Karijini. In addition to its magnificent inland attractions, the Pilbara's coastal plain is home to National Heritage listed Dampier Archipelagoand the Montebello and Mackerel islands.

Karratha is a rapidly expanding town with the largest shopping centre in the North West and an array of education, social and recreational services. The region’s major industries include iron ore export, oil, natural gas, salt, nickel, fishing and tourism. The Burrup Peninsula has the world’s most prolific Aboriginal rock engraving site with over 10 000 identified Aboriginal art sites. Port Hedland has a great history of Indigenous culture and is renowned for its long trains, big ships, salt piles and red dust. The town’s main industries are iron ore processing and export, salt production and livestock production. Its port is one of the largest in the world in terms of tonnage, shipping over $3 billion worth of product every year. The Shire of East Pilbara is the largest Shire in the Australia covering approximately 372,571 square kilometres; larger than the state of Victoria. Driving will take 2 days to cross from east to west and 6 hours from north to south.

It's main town sites are Newman, Marble Bar and Nullagine, with a number of Aboriginal Communities namely Jigalong, Punmu and Parngurr, lrrungadgi and Parnpajina.

The Shire of East Pilbara's administrative centre is located in Newman.

Nullagine is Newman's nearest neighbour being 192 kilometres away, along the Marble Bar Road. If prospecting is your passion then the Shire of East Pilbara, being rich in minerals, is a great destination. Nullagine was the site of Australia 's first diamond discovery and was a thriving town during the gold rush period of the 1880's. Remnants of that bygone era are still evident in the region.

The Marble Bar Road is predominantly gravelled for the 303 kilometres between Marble Bar and Newman. Marble Bar has the reputation of being Australia's hottest town. Marble Bar is the gateway to explore areas such as Coppin's gap, Kitty's Gap as well as Doolena and Carrowine Gorges.

In the centre of the Shire is Karlamilyi National Park.

At the northern most point of the Shire is the pristine coastal area of Cape Keraudren (Croy-don). This 4,800 hectare reserve offers breathtaking coastal views as well as fabulous crabbing and fishing. A must see for the day tripper or camper.

Visit the Shire of East Pilbara Website to learn more

Newman lies some 15 kilometres north of the Tropic of Capricorn and is the largest town in the East Pilbara. A real oasis in the outback it is sometimes referred to as the Heart of the Pilbara, the Gateway to the Western Desert and Australia’s Largest Shire. The Shire has been focusing on revitalising the town, further enhancing it as a key regional centre, with aspirations to increase its current population base as a resource town of 8,000 people into a subregional centre that caters for 15,000 permanent residents.

Newman is in the East Pilbara region of Western Australia, located about 1,186km north of Perth and 9km north of the Tropic of Capricorn, it can be reached by the Great Northern Highway. Newman sits on the traditional lands of the Nyiyarparli people and the Martu people are the current custodians. Founded in 1893, Marble Bar has earned a reputation as Australia's hottest town, owing to the consistently high temperatures experienced during the summer months when the mercury climbs over 38 degrees for days on end.

Located on the Nullagine River 189 km north of Newman, is the town of Nullagine.

The town takes its name from the local Aboriginal name for the river that runs through its centre. Nullagine has plenty of waterholes for the adventurous to discover, including Beatons Creek Gorge, Garden and Daylight Pools.

Gold prospecting and gem fossicking are very popular. However, most of the area is under lease, so you will need to seek permission first.

A visit to the Conglomerate Hotel or the Nullagine Roadhouse will not only provide you with current road condition reports, but you will also be able to purchase fuel, supplies and obtain information about the history of the area. The Shire of Ashburton serves communities across a vast region in the Pilbara, Western Australia. The region is known for mining, agriculture and fishing, and for its rugged, ancient landscape.

At nearly half the size of Victoria (105 647 square km), the Shire of Ashburton boasts some of the world's largest open cut mines, largest pastoral leases and cattle stations and a thriving fishing industry all set against a beautiful and ancient arid tropical landscape.

The region's 10,000 residents are employed in a variety of industries including oil, gas, mining, cattle, fishing and tourism. The supporting infrastructure also provides employment and career opportunities.

The Shire of Ashburton comprises four established town sites: Tom Price, Paraburdoo, Onslow and Pannawonica, spanning a massive 105,647km² from ‘reef to range’ – that’s nearly half the size of Victoria!

Covering such a vast region, it’s not surprising the Shire has a long list of attractions to boast. Headlined by the awe-inspiring Karijini Park, the region is also the lifeblood of oil, gas, mining, cattle and fishing industries.

As the Shire grows in stature, diversity continues to be Ashburton’s badge of honour, complementing existing Indigenous communities with thriving tourism and industry; a curious hybrid epitomised by the contrasting nature of the tropical-arid landscapes themselves.

Visit the Shire of Ashburton Website to learn more

Life in WA’s highest town is full of adventure. It’s the gateway to the Hamersley Ranges and Karijini National Park. Tom Price residents love the great outdoors and take part in a huge range of activities, from arts and sport to volunteering.

Onslow is a growing resource hub of the “coral coast” that supports an active fishing and pearling industry, including offshore oil works and a solar salt mine. Chevron Australia’s Wheatstone natural gas development and the Onslow airport expansion are raising the profile of this once sleepy town.

The 700-strong community of Pannawonica is undergoing a renaissance thanks to the recent increase in mining activity, with improved housing, services and community facilities. Pannawonica comes alive every year for the Robe River Rodeo, with funds chanelled back to the community.

Paraburdoo is a close-knit community, housing many of the workers from the nearby Rio Tinto Iron Ore mine. Back-to-back Tidy Town awards show how proud residents are of their community. The town’s friendliness, natural beauty and fast-improving services are attracting more families to live in Paraburdoo. 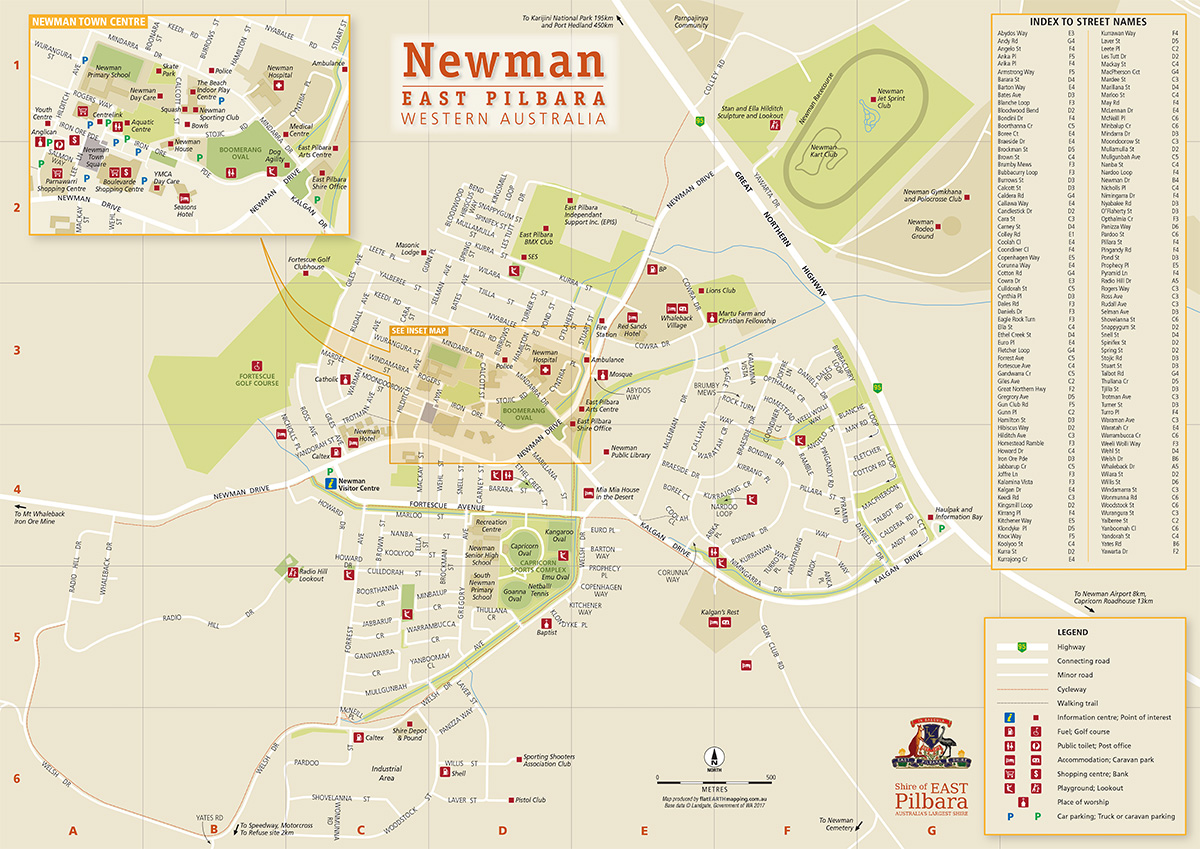 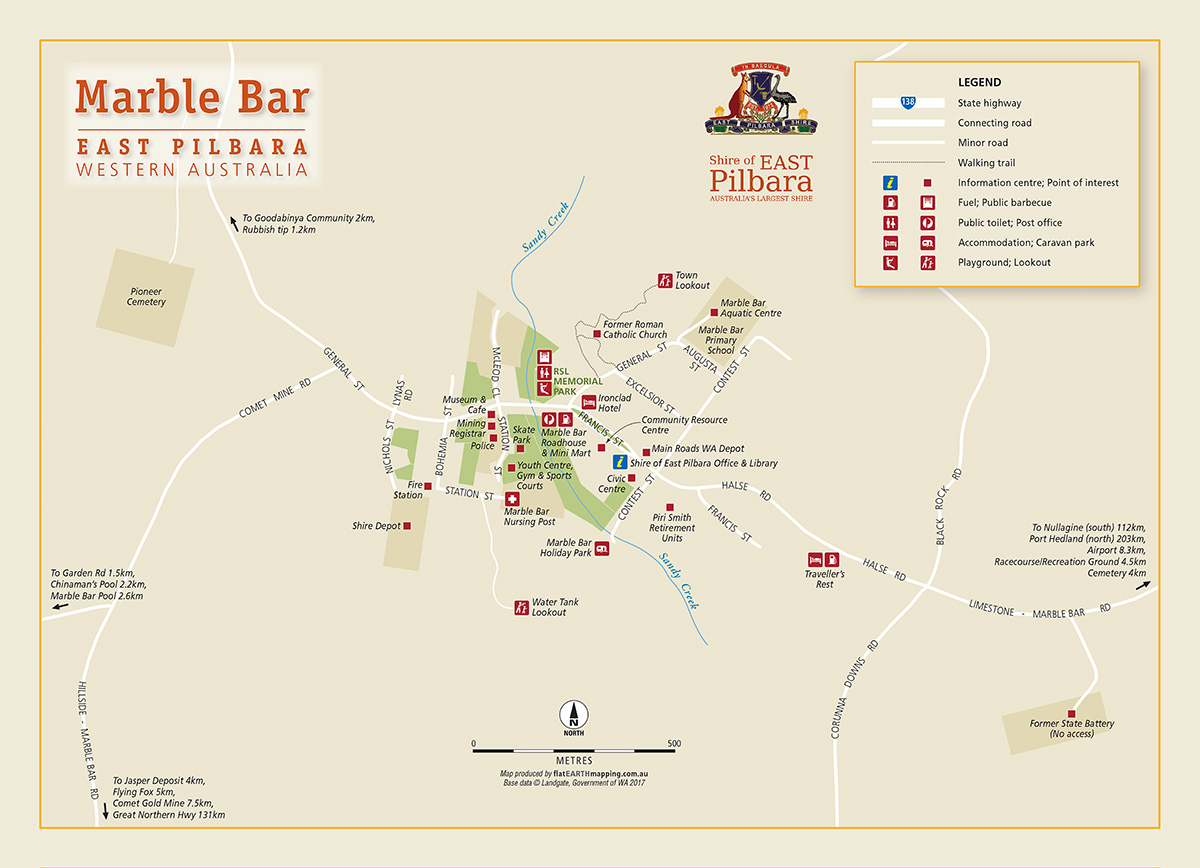